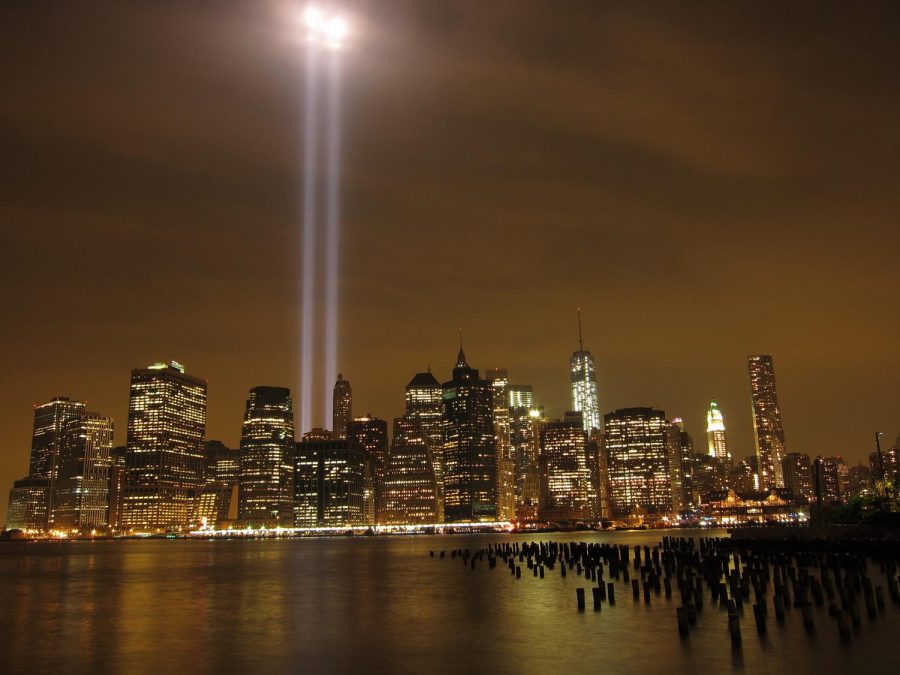 All of the students in this year’s journalism class were born after Sept. 11, 2001. For them, the events of that day are historical, not personal. One of the most important missions of any school is the connection between the current generation and those who came before them, and a good way to reinforce that bond is to learn how to listen carefully and preserve in writing what others tell us. Please allow me to express my appreciation to our staff this year as they create another link in the collective memory of our community.

Mr. Hibl was a young man in his early 20s. He was at the state capitol in Helena, Montana, working as a security guard for the governor of Montana.

“In the security office, we got a phone call from the overall state supervisor, and he said that the nation was under attack, and this guy was notorious for… “prankiness” and so at first we just thought it was a load of BS, and we were like, “Ah, whatever.”

“That’s all we knew. For probably about 8 hours I just sat on the front step at the governor’s house. I didn’t know anything else, I watched some squirrels, and hoped to God that the world wasn’t ending or anything like that. Just a young 20 year old with a flashlight and some keys.”

He said he’s seen changes since that day. “I think it has changed a lot with the way we look at security, and I think that’s the biggest change that I can think of right off the top of my head. As far as air travel and things of that nature.”

Mr. Tomac was 31 years old at the time when the attack happened.  He was at Purdue University.

“I just remembered I was at the graduate house. It was a beautiful September day, and I thought, what in the hell, what just happened?”

When Mr. Tomac was asked what he thought about the ways American culture has changed since that day, he said, “Fear is a very powerful weapon… people are more fearful these days… Fear will allow people to give up their liberties if they are scared enough.”

Ms. Kalke was 14 years old at the time.  She is now the librarian at Sidney C. Huntington Schools in Galena.

“I was at home, in a house at Talkeetna, Alaska. I think I felt some fear of the unknown of what’s happening, and concern and empathy for those that were directly involved in the 9/11 attack. The 9/11 attack was the beginning of the Iraq war, and I think that’s caused a lot of kind of heartache or issues with family members in the service… the airport used to be really different.”

She said before 9-11, there was little security at an airport and you could just walk up to the gate. She added that people’s attitudes in general is different. “The culture around mental health and for service members has changed,” she said.

“I was sleeping, actually, and someone called me on the phone, and I was very sad for our people.”

She said she’s never really thought about how American culture has changed.

“I’m thankful for the heightened security at all airports looking out for the safety of all people.  I think of all of the people who lost family and friends in the twin towers and on the planes.  We stand as one in the memory.”

Mr. Alexie was 20 years old at the time. He’s my uncle, and he was working in Donlin Gold Mine.

“Yeah, I was stuck working in Donlin Creek at the time. I was stuck working an extra shift on the drill rig. I was supposed to be getting off work and go home that day. We had to move drillings with heavy equipment. They flew the helicopter and FAA called camps and told them to put it down or they will put it down with an F-15.”  He said he was “shocked” watching it on television. “I thought we were watching a movie.”

He did not think life has improved since 9-11. “The American culture has gotten crazy since,” he said.

Mr. Apfelbeck was 45 years old and living in Galena at the time. He was a language arts teacher at PERS, which later became GILA.

“I became aware of it when my mom called us up, about 5 in the morning, and all she said was, “Turn on the TV.” So we turned on the TV, and we turned it on just in time to see the second plane to crash into the World Trade Center. My first thought was that it was a really good movie special effect. I knew intellectually what was going on but I wasn’t trying to think about the awful stuff I just seen.”

Mr. Apfelbeck said he thought he was “looking at Pearl Harbor and we were going to fight like in the World War 2. It was scary. I had a 3-year-old son, and knew what war was like.”

What has happened to American culture since that day? “I think it changed for the worse,” he said.

Mr. Stringer was 28 years old at the time. He was teaching at the Emmonak School. Mr. Stringer is now the assistant principal at the Sidney C. Huntington School.

“I was surprised that it was happening and I was confused about why it happened.”

He said the changes he’s seen had a long-term effect on American culture. “Actually, it brought America together and closer (at the time)… but the long-term effect it has created endless wars for America.”

Ms. Lauterbatch is my aunt. She was 53 years old and lived in Anchorage during the 9-11 attack.

“I felt very sad for the people’s lives that were lost. It was a scary thought for me of what would happen next,” she said. “I think we feel less secure now after 9-11.”

She was 33 years old when the event happened, in her home in Aniak. Her dad was in Anchorage. She is my mom.

“I didn’t understand, because I was so sad and shocked.” Her infant son Rohn had died around that same time.

What do you think about the ways in which American culture has changed since the moment? “It has changed that we have more security. More recognition to first responders, and more racial profiling against the Al Qaeda.”