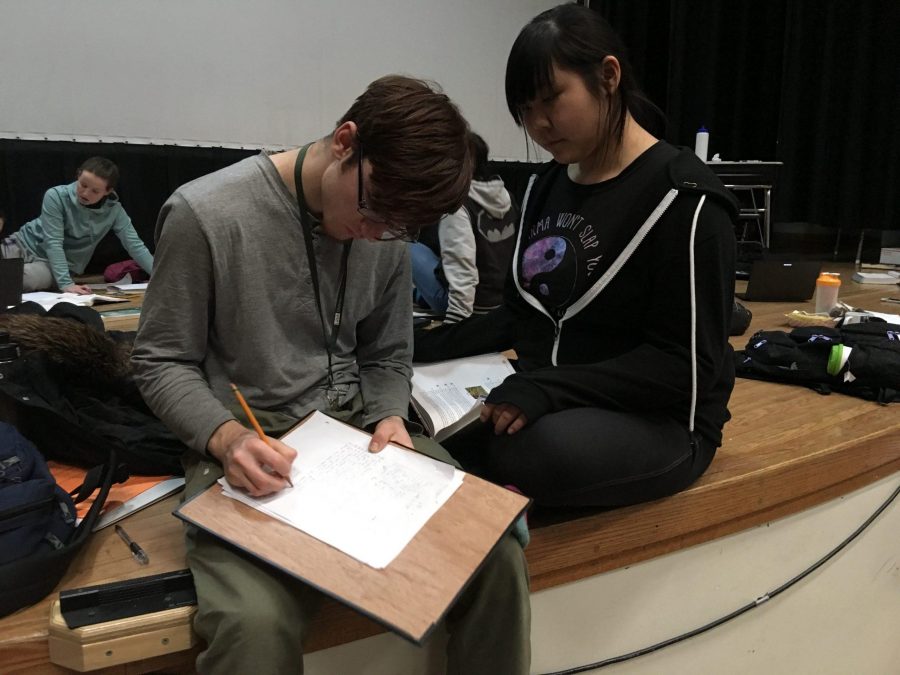 Students work through math problems during class conducted on the GILA auditorium stage on Tuesday afternoon.

Today was a hectic day for the high school students and teachers at Galena schools.

A leaking pipe on the city water system broke, which closed the SHS campus, as well as causing water shortages for most of the residents.

“They [the city of Galena] have not found the leak yet, when they do it will be hours for the fix,” wrote Supt. Chris Reitan to school staff on Tuesday morning, “Classes will proceed as normal on the GILA campus.” In an email sent out in the afternoon, Supt. Reitan repeated that the leak had not yet been found and fixed.

However, with one campus open, school continued for the day. The water system at GILA is separate from the rest of the community. “They contained all GILA students to the GILA campus and invited SHS students,” said Mr. Von Thaer.

Meanwhile, there is no water at SHS or in New Town. The city is digging dirt on the water line trying to find the leakage, said Mr. Von Thaer, adding that city maintenance is going to continue to work through the night to find the leakage.

“As of yet, we do not know when the water will be restored,” said Mr. Von Thaer.

Although the buildings around the GILA campus were a bit crowded with all the staff and students from SHS, school continued for the GILA staff, with SHS classes being taught in the auditorium, the gym, the dining hall, the student union building, and in the composite building commons area.

Dawn Pomrening, the academic support teacher at the SHS campus, said “we probably learning some things….I think that admin did a great job… I think the students were well behaved with all the things that were going on.”

Students and staff said that they just adapted to the sudden changes.

“I like the fact SHS teachers came over to help facilitate groups,” said Angie Pittsenbarger, the secretary at the GILA campus.

Kevin Schwoch, a social studies teacher on the GILA campus, said his day pretty much went without a hitch. He thought that the day would be more of a relaxing day with students hanging out in the SUB or studying.

Mr. Schwoch said that although nothing school related had to be changed for his class, some things may have to change at home until the city fixes the water. He also said that because of how busy the dining hall was he decided not to eat there.

The school district said in an email on Tuesday afternoon that plans were in place to deal with continued problems with the city water system. Those updates will be emailed to Galena parents and families and announced on the KIYU wireless broadcast tomorrow morning.