Riding along the river in blissful silence 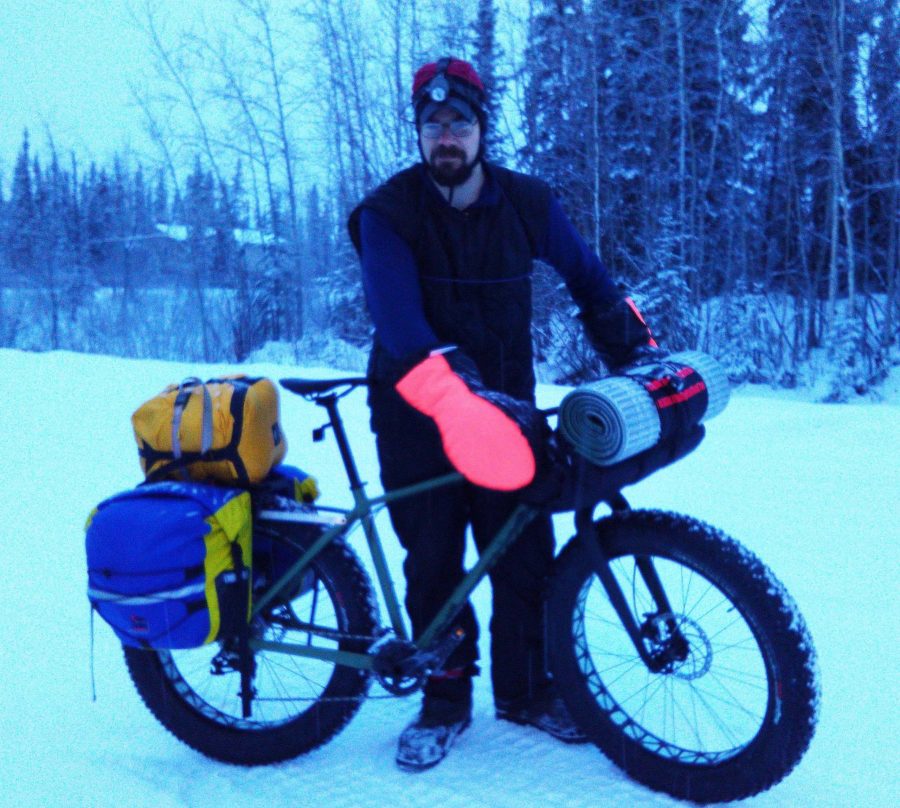 Tim Kalke wanted to do something big.

Mr. Kalke, the outdoor survival, weightlifting and driver’s ed teacher, rode thirty miles from Galena to Dainty Island up the Yukon River. The trail was bad. Kalke rode the bike for thirteen hours on his specialized Fat Boy bike, a snow bike, earlier this month under the full moon.

Mr. Kalke never made it to his destination in Ruby.

“I knew that the trail wasn’t going to be perfect, but I didn’t want to back down because it wasn’t perfect. Nothing in life is perfect,” said Mr. Kalke.

Mr. Kalke has been training for this trip with endurance work outs with at least an hour of cardiovascular workouts, like running, biking, treadmill, stair stepper and riding his bike to and from work.

“I was excited, nervous. I didn’t know what to expect physically, but when I got going it was incredibly good fun,” he said.

Mr. Kalke wants to attempt to go out and try again sometime soon on another weekend of the full moon.
“I’ll get it next time, just talking to you makes me want to go again,” said Mr. Kalke.

Mr. Kalke said one of the other big things he ever did was when he was in the military when he hiked the Manchu Mile. Kalke and other soldiers hiked twenty-six miles in eight hours in remembrance of the soldiers who died in the Bataan Death March during the World War II.

“I thought I was going to get tired but I didn’t. I was exhilarated, when I stopped to drink water than boom! Let’s get going,” said Mr. Kalke.

On the day of his bike ride upriver, the weather and scenery was foggy part of the time, and cloudy the other part of the time, so he couldn’t see the full moon. The temperature was warm – 30 above when he left.

When Mr. Kalke turned around at Danty Island all he saw was his own bike tracks and some tracks, wolf or fox tracks.

“I just wanted to keep going. I felt small, such big land, also had these little reminders that I wasn’t the first person out there,” he said.
This is how Kalke stayed warm: balaclava, contact gloves, overmitts, rain coat, down coat, three pairs of socks, base layer tops, base layer bottoms, fleece pants, wind pants, light-weight snow-pants, and boots.

“I heard nothing, which was cool, but the wind, the wind blowing, and different types of crunching of the snow. Felt that his tire was digging through the snow, and squeaky crunch which meant I was rolling on top of the snow,” said Mr. Kalke.

All the gear that Kalke brought with him was 30-35 pounds, and his fat boy bike weighed about 30 pounds, so altogether it was about 60-65 pounds.

Thanks to Mr. Kalke for giving me this information.