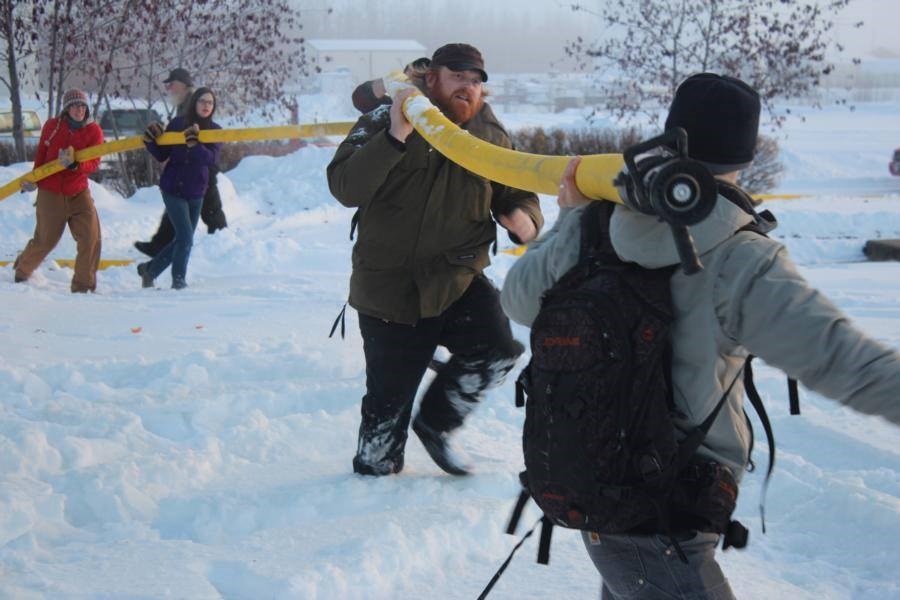 “I felt like we were lucky,” Mr. Bodony said. “The fire could have been much worse.”

Mr. Bodony said he received a 911 call from Supt. Chris Reitan at 12:15 p.m. concerning a fire at the dining hall. Students had been eating lunch in the dining hall, but were quickly evacuated when the fire alarm sounded.

When volunteer firefighters arrived on scene a few minutes later, teachers and staff were already in place fighting the fire.

The fire had already been calmed due to the initial response of the school and staff, he said.

The fire department got into position and proceeded to remove the exterior walling to look for any flames that had not yet been extinguished, Mr. Bodony said.

“They did a good job and it was quick thinking. They wanted to save the building,” said Mr. Bodony.

The fire started inside the building in the dish washing area, he said.

“I am willing to guess that [the fire] started in a wall next to the dishwasher,” he said. The fire was quickly contained and put out in about two hours.

Students evacuated from the building were sent to the SHS campus for the rest of the day, and boarding school students ate dinner in the SHS gym.

U.S. Fish and Wildlife employees also played an important part in putting out the fire, with many employees rushing to the GILA campus to help with the firefighting efforts.

“It looked like it could have got out of hand, but the quick responses and relative amounts of water helped stop that,” said refuge manager Kenton Moos. “It reminded me how people came together like in the flood.”

Mr. Moos said he was impressed by the teamwork of the responders and willingness of people who came and helped. ”I am proud to live in this community,” he said.

The first people to respond to the fire, mainly teachers and school staff, all acted quickly.

Automotive technology teacher Josh Pittsenbarger, who is also a volunteer firefighter, was working in the auto shop when the fire started. He said that he worked quickly to help keep the staff and student body calm, working alongside GILA Principal John Riddle and others.

“I just wanted to make sure we got it out as quickly as possible, saving as much of the structure as possible, and making sure nobody got hurt,” said welding teacher Todd Brown.

As they fought the fire, they also focused on saving the building and making sure people were safe and sound.

While staff and teachers continued to fight the fire, more of the community showed up, including the Galena Mayor John Korta, members of the U.S. Fish and Wildlife Service, the Galena schools maintenance staff, Galena Dr. Tamera Huntington, and many more. Because of their efforts the fire was put out quickly and no one was hurt.

In a letter sent out to parents today (Tuesday, Jan. 13), Supt. Reitan wrote that the fire marshal should be inspecting the site tomorrow and a contractor will arrive soon to look over the damage.

“We are anticipating remediation work to begin this weekend or early next week.” Mr. Reitan wrote. “It appears that once the building has been cleaned and sanitized that we will be able to use the building for preparing and serving all meals. We are anticipating being able to prepare and serve meals out of the Two Seasons Dining Hall by the end of the week.”

“The fire was localized to the dishwasher room. We have that room walled off, electricity turned off to all outlets in that room, and all the water drained in that part of the building.”