The Hawk Highlights • May 7, 2016 • https://hawkhighlights.com/nyo-athletes-return-home-with-awards-personal-bests/ 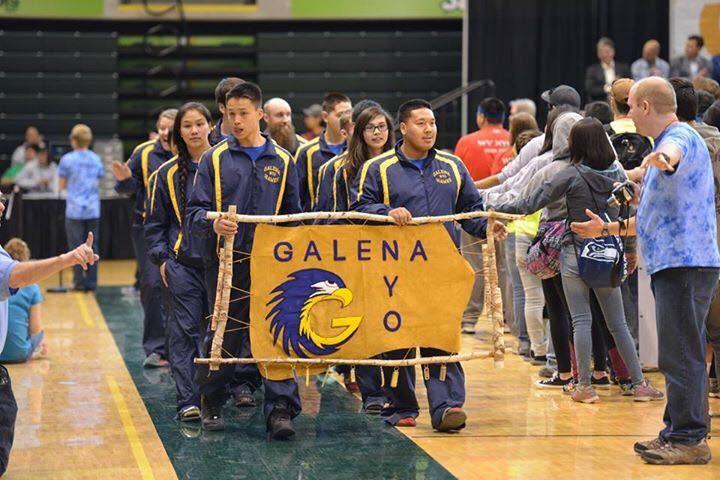 The Galena NYO team arriving at the state meet. The banner won an award for being the best at the meet.

The NYO athletes returned from the state tournament in Anchorage in April with a lot of awards and plenty to be proud of.

“[Galena] did an amazing job,” said Joel Wilkinson, the coach for the athletes. “They represented Galena with great sportsmanship.”

Mr. Wilkinson said he is surprised about how much the program grew and how much interest is in it.

“This year we had 29 students show up at varying time, and consistently 20-22, so the program is growing since year one,” he wrote in an email. “The community interest has been great and many people, families, and younger students, seem to be interested in learning more about NYO. I’m hoping that this is foundational to a growing program that will continue on as part of Galena culture!”

The NYO team walking into the opening ceremony with an outstanding banner that resulted in the Best Banner award.

“The banner was a very big project. Coach Ineke Wilkinson put a lot of time into beading it, as did Vera Rose Mountain, and a few other students. Ineke and I worked on it until about 2:30 in the morning. It was a lot of work, and Ineke pretty much spent all of her spare time on it, but the project was worth it. . Our team won “Best Banner” Award this year, which was an honor for sure. Most importantly Ineke and I wanted to have a banner that represented Galena well, and be able to have a banner that reflected some of the beautiful traditions that come from here as well,” he wrote.

The athletes had to do a lot of training and preparation for the state tournament, including weight lifting and conditioning on their free time.

“It takes a lot of hard work and dedication. This means weight training, body weight exercises, circuit conditioning and lots of stretching; all of them can improve through practice and time in the weight room. We started the conditioning training January 14th, and then spent about three weeks of exclusively conditioning practices, Monday, Wednesday and Friday, for about two hours.

“Typical practice started off with running laps for warm up, then a lot of stretching (about 30 minutes), then some pretty intense circuit training. Depending on the day we had a body weight circuit and mixed strength training with weights. The stretching addresses flexibility for events, particularly jumping and kicking, and the weights are meant for adding explosive power,” he wrote.

”Native Youth Olympics, and the many other traditional Native Games is an important part of cultural preservation. The NYO team here in Galena represents many different villages and cultures, through their efforts, attitudes, grades, and sportsmanship. The student athletes have worked hard, and the emphasis on doing one’s best each practice and event has been a value the team has focused on this semester. The NYO team has emphasized group support of the individual and keeping one another positive throughout the semester,” wrote Mr. Wilkinson.

“This year marks out third year of NYO in Galena, and our first year as a lettering high school sport, this year we had 10 students letter by going to Anchorage. We as coaches have been excited to see a growth in turnout and participation. This year’s NYO held practices and had a club for students interested in just participating in NYO events without competing. This year marked our first season having multiple travel events, which was very exciting. This year’s team has had a good mix of returning players with experience as well as new students competing for the first time, or even learning NYO events for the first time.”

“We got to participate in the 2016 NYO Games this month, April 21-23 in Anchorage. This is the third year the team has traveled for the state wide event, and several of our athletes were very competitive in their events. The whole team has focused and worked hard this semesters and they represented their heritage, families, villages, and Galena with their very best. GO HAWKS!”