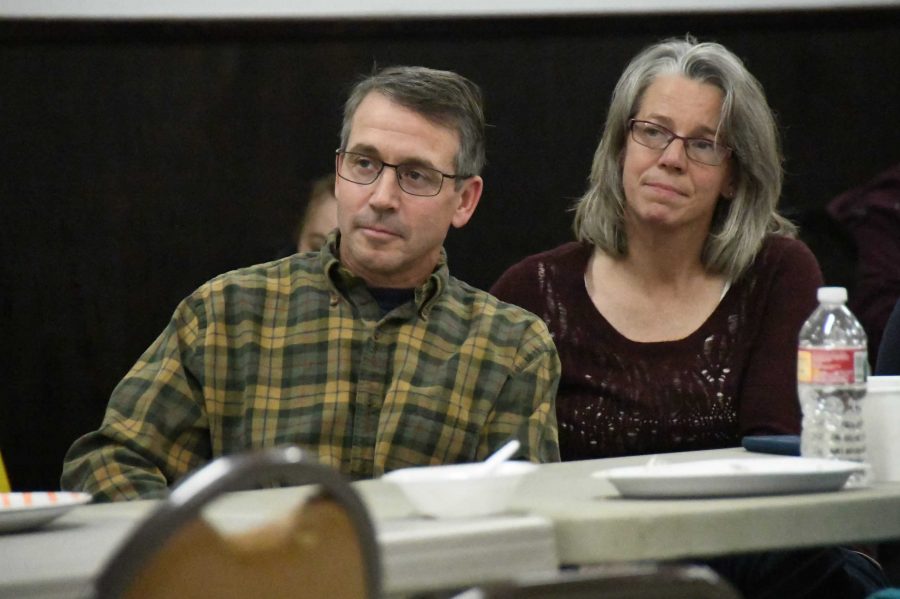 Jon and Tanya Korta at their farewell potluck.

Former Galena mayor Jon Korta and former teacher and behavioral health counselor Tanya Korta were honored by the community at the Larson Charlie Community Hall to celebrate them in an honorarium on a Thursday, Oct. 18.

The Kortas have been here for more than 20 years. Many of the elders in the community attended. Everyone had smiles on their face and were full of happiness. On the food table, there was spaghetti, apple pie, cake, dry fish, akutaq, jello, turkey, and many more.

“I am really honored to be a part of this community and I would like to thank you all for being here,” said Mr. Korta.

“Probably one of the most special moments of my life is when i would walk into school and I’d hear, “Hey coach!” I just liked that simple phrase. “Hey, coach.” I’m going to miss that.”

Jon said that one of his favorite memories of being a coach in Galena was when the boys took fourth place at state, a team in which his son Kaleb Korta and fellow runners Jacob Moos and Trenton Ambrose were a part of.

Both Mr. and Mrs. Korta gave speeches after everybody else had spoken.

Former and current cross-country runners and skiers gathered for a photo during the event, and the staff at the Galena health clinic gave Mrs. Korta some gifts.

According to a resolution passed by the Galena city council and read out loud by current Mayor Nolan Aloysius, Mr. Korta had a healthy relationship with every member of Galena and respected everyone as an individual. Mr. Korta helped with everything that the community needed and how they needed pointers if it was a good or a bad thing. He also helped with the community when the 2013 flood happened, and he was careful with what he had to offer help with.

During his speech to the community, Mr. Korta said, “The students made it fun for every school trip i went on and was a part of. The flood was a drawback in 2013, but it gave us an inspiration on how to help others when they are in need of help. The city of Galena has made me and my whole family who we are today. You guys embraced us for the future, supported us when no one else was, and got us involved with everything the community offered. The people who know us has helped raised our kids. You guys have made them who they are today.”

The Kortas are now moving to their new home in Talkeetna.