Jenna Buchanan returning to Galena to retire her jersey number 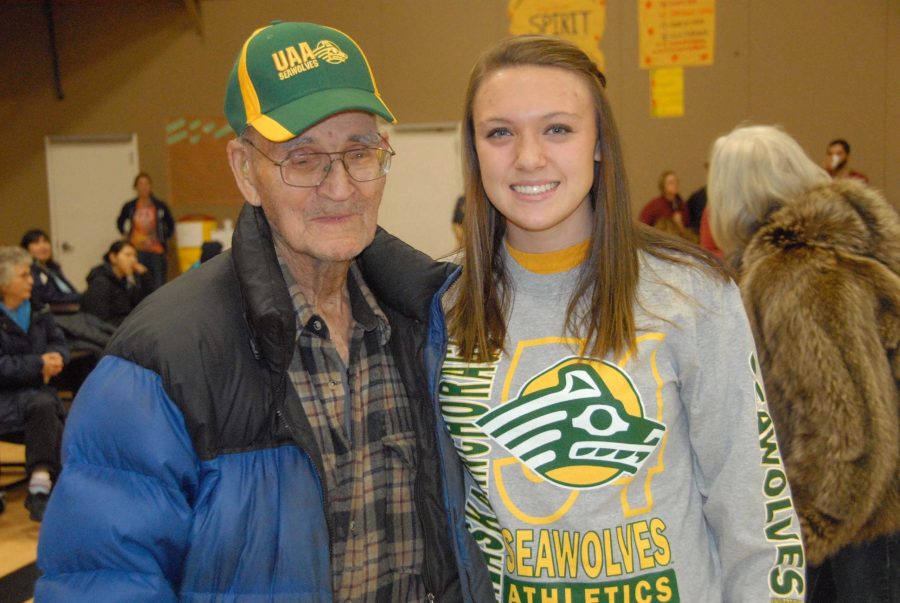 Jenna Buchanan, shown here during her 2011 signing her intent to play at UAA in a ceremony in the SHS gym along with Galena elder Sidney Huntington.

Galena’s own Jenna Buchanan will be honored in a ceremony to retire her jersey number during the Valdez home games on Feb. 24.

Jenna played high school basketball for the Galena Hawks from 2008 to 2012, including the state division 3A championship in 2011. She then went on to play for the University of Alaska Anchorage Seawolves, earning a scholarship to play for the team.

Jenna was the first Galena Lady Hawks basketball player to sign a letter of intent with a nationally ranked college basketball program, according to an Alaska Dispatch News article written Nov. 14, 2011, by Kaylin Kopp, editor for the Hawk Highlights at the time.

When she played for Galena, she was the girl’s division 3A player of the year in her senior year.

She continued her excellence in college. Jenna earned the first team all Great Northwest Athletic Conference and academic all-district honors as second leading scorer at 11.9 points per game, according to the UAA’s basketball bio on Jenna. She shot the team best 85.1 percent from the free-throw line and snatched 3.6 rebounds and 1.2 steals per game at UAA. She now holds the UAA record for the most three pointers made for her career and was a valuable asset to have on any team she played with. The team advanced to the NCAA title game. (I was there when she broke UAAs’ three-point record.)

According to the GCSD 2016-2017 Student Handbook, she will be joining the current Galena Hawks that have been retired:
Larry Malemute #25
Harold Esmailka Jr. #35
Joseph Hausmann #04
Chad Burgett #21
Jenna Buchanan #22