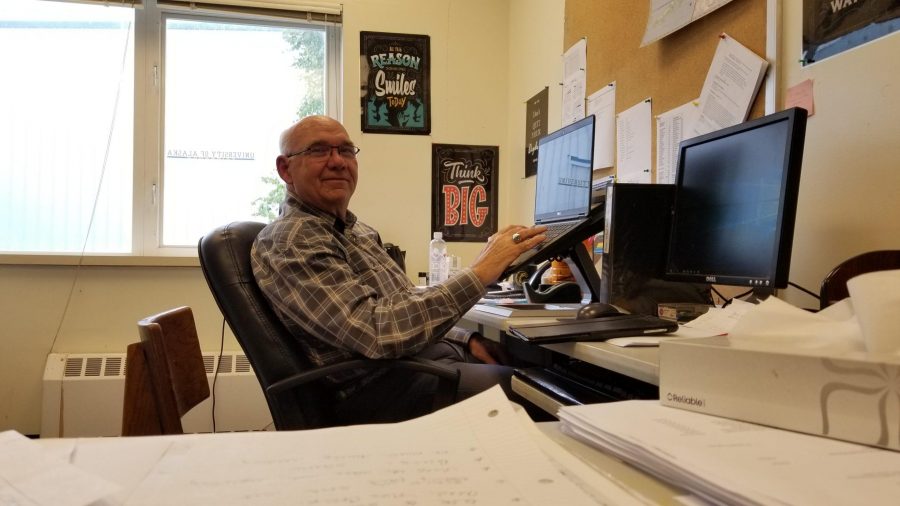 David Casey is the new assistant principal at the Sidney C. Huntington School.

Mr. Casey would like to meet students and help them with their education. He also wanted to bring his experience as a principal at other schools here to Galena, and he is open to helping out in any club. Mr. Casey is happy that he and his wife Sutton moved here, and they’re pleasantly surprised about Galena.

He has one sister, Diane, and she is three years younger. She works in office management, while her husband is a steel executive. His father, Donald, is retired military and he served in the Army. His mother, Mary, was a stay-at-home mom. He is married to Sutton Casey, who is a teacher at GILA.

Mr. Casey retired in Colorado, but then got asked to come back and be the principal at Galena City Schools. His wife, Sutton, who was also retired, said she wanted to go on an adventure. So they came to Alaska, and ended up in Galena, and joined the Galena City School District.

Ryan Harms makes his return at Galena as the new physical education teacher. Mr. Harms has intentions to teach yoga to students and to start a band. Not only that, but he would like to help out with a music club as well.

“I’m very excited to be back in Galena, and I hope the year will be delightful,” he said.

Mr. Harms was born on December 26, 1980, and is originally from Washington. He likes all sports but loves basketball and football. Throughout his elementary years, he attended a school more commonly known as the “Jefferson Elementary Jaguars.” During his middle school years, he had joined the Lincoln Spartans, and finished off at Pullman High School and joked about wanting to become “Captain of the synchronized underwater basket weaving team” after graduating.

Mr. Harms has been living in Alaska since 2004. His parents, Rosalie and Jerry Harms, are both retired teachers. He has one sister, Kassandra, who is 46 years old and currently teaching in Heely, Alaska. Mr. Harms came to Galena with hopes to reunite with old friends and teach students what he is passionate about.

Sutton Casey, the new language arts teacher on the GILA campus, wants to sponsor theater, have active learning in class, and do many different things. She teaches World Literature, Advanced Composition, Speech, and College Prep.

She was born on October 17, 1963, and lived in Grand Junction, Colorado. Her mother Leah Hayward is retired. Her father Doyle has passed away. Her sister, Chalane Coit, 52, is a pastor. Her other siblings all own a mortgage business together: Bri Renzi, 49, Tor Hayward, 44, Brant Hayward, 42, and Ryar Hayward, 39. She went to two elementary schools in Utah, and then moved to Colorado. Later she attended Fruita Junior High and Fruita Monument High in Colorado. She graduated in 1982.

Since she graduated, she always wanted to be a teacher. Casey had been in the same place for a while and wanted to move somewhere new, and always wanted to experience Alaska, so that’s why she is in Galena today. She likes all sports, but her favorites are wrestling, rugby, and football, because her sons had played those sports. Theater is the club she would like to sponsor. She has four grown children, four grandchildren, and two dogs. She loves the children here and appreciates the students.

Kristin Cannon, the new chemistry teacher at the Sidney C. Huntington School campus, may have started in Anchorage, but in reality, she’s been all over the entire world and can speak German and Mandarin Chinese.

She was born to Mike and Marie Cannon on November 20, 1978. Her parents are now retired, but they used to be a pharmacist and a teacher, respectively. Ms. Cannon has two younger sisters: Rebecca Ebel, 37, and Kimberly Jorgensen, 34, both stay-at-home moms.

She wasn’t sure what she wanted to do after she graduated from high school, and she’s still contemplating what she may want to do in school this year that’s new and different. She chose to come to Galena because she was offered a job that seemed interesting and because she likes small towns, villages, and communities. She’s not a huge fan of sports, but she does enjoy recreational swimming and cycling.

Shayla Schwoch thought she wanted to be a photographer. But here she is in Galena, Alaska, and she is working on becoming the next librarian at Galena City School. Galena School District is excited to have Mrs. Schwoch back at this school in a new role in the library.

Mrs. Schwoch was born on March 31, 1988. Mrs. Schwoch is from Auburn, Washington and has three siblings. She has an older sister named Avery, 25, is a paraeducatuer. A younger brother Erik, 23, is a train attendant; a younger sister Olivia is 9 years old and still in school.

This school year, Mrs. Schwoch would like to implement new projects and she would also like to sponsor or help out with the student council. She has had a lot of experience helping students. Last year she was an academic support teacher at Galena. Mrs. Schwoch made sure her students got their work done and got it turned in on time. If it was due in the next couple of days, she would stay and help them get it done.

Deserae Hager is the new American Literature teacher at the GILA campus. Miss Hager likes steampunk and she is your stereotypical Texan person. She has dyslexia but she knows how to cope with it. She would like to start a sewing club. She doesn’t like sports that much.

Miss Hager was born on September 20, 1984, and her home town is Henrietta Texas. Her parents are David and Debbie; she has two siblings. They are Denise, 36, and David, 30. Her mother is a bank teller. Her father is an electrical supplies person. Her sibling Denise was a hair dresser but now she is a stay-at-home mom, and David is a lineman.

She came to Galena because she always wanted to move to Alaska after reading My Side of the Mountain. During the school year she want her student to make more decisions about their education.

Rich Reifsnyder, the new physical science teacher at the SHS campus, wants to teach students the basic and importance of science.

Rich was born on February 28, 1981, in Louisville, Kentucky. His parents are Gretchen and Robert Reifsnyder. He only has one brother, Adam Reifsnyder, 33. His dad just retired from being the president of United Way of Greater Cincinnati; his brother Adam is working in the digital marketing as a manager with the company of Brand-Muscle.

After graduation, he went to college at the Massachusetts Institute for Technology in rocket science. He chose to come to Galena because he spent a lot of time working with NASA and he wanted to make a major change also related to science. Galena was also hiring and he thought he’d make a good fit for the job. Mr. Reifsnyder would like to add space science and have model rocket experiments with students.

Not all of the new staff has been interviewed.
Mr. A