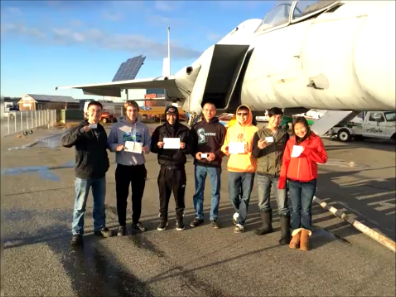 Seven students from the Galena Interior Learning Academy’s aviation program traveled to Anchorage recently to get their third class medical certificate, which is a certificate required by the Federal Aviation Administration (FAA) in order to fly an aircraft solo.

The students were Evan Charlie, Kobe Panigeo-Frankson, Elena Jacobs, Walter Lord, Dalton Macar, Brandon Milne, and Jacob Moos. They were accompanied by aviation instructor Josh Kaufield. The exams were similar to a physical for sports, but had other additions such as the color blindness test, urine test, and a peripheral vision test.

The students also visited the Alaska Aviation Heritage Museum. The museum “presents one of the finest displays of Alaskan aviation history with many interactive displays, memorabilia, photographs, films and artifacts from personal collections of Alaska’s pioneer aviators,” according to museum publications. The students saw ancient aircraft, a Cessna 172 simulator, a cockpit of a Boeing 727, and a view of Lake Hood, the busiest seaplane base in the world, which the students enjoyed.

During the walk-around, the guide was explaining different classrooms, and the operations that occurred in each room. She also described certain pros and cons of the program, such as high demands for students who graduated with knowledge in the aviation field, such as maintenance, pilots, and ATC workers.

The biggest con of the program, according to the tour guide, was that “students [were] failing the math classes [calculus in particular] which made them drop out of aviation.”

Another problem are the high expenses in order to have flight time training with the instructors, as well as paying tuition for other college classes.

During the tour, the aviation class bumped into Elijah Jensen, a former student who is a senior year at UAA and will be taking his commercial pilot certification check-ride this semester. He advised the aviation class to take pre-calculus with Mrs. Betterton and said that she did an excellent job in preparing him for his college math classes.

The aviation class walked out of the UAA tour with a better picture of what the next step is in their aviation training, including a better direction for planning for a possible career in aviation after high school. The aviation instructor at GILA, Mr. Kaufield, said, “Getting each student a medical certificate while not needing to worry about the weather or the amount of daylight left for our return trip back to Galena. You have no idea how great of a burden is off my shoulders knowing that each flight school student has a medical certificate.

“Among many things, that will be one thing in particular that I’ll be thankful for this thanksgiving. I truly had a wonderful time with all of you guys. It was great to have students from both flight school classes together, and also get a chance to connect with former GILA flight school students.”