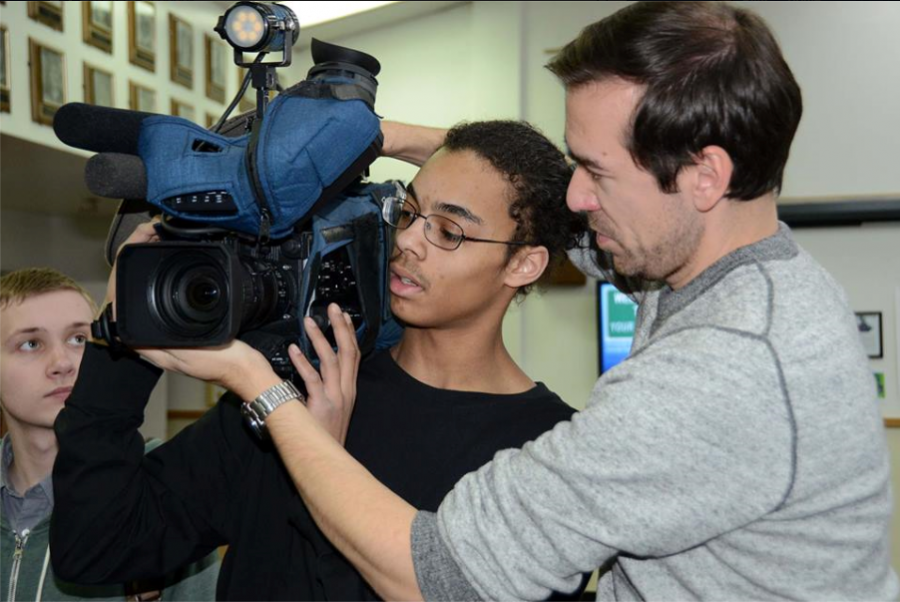 KTUU Dan Carpenter shows aspiring videographer how to operate the kind of camera used to record the evening news.

KTUU reporter and videographer Dan Carpenter came to the Galena high school journalism class to talk with students about the journalism career on Feb. 26.

Ranging from advice to young writers to journalism techniques, Mr. Carpenter covered many of the processes he goes through developing a story.

As a reporter, Mr. Carpenter said he is constantly busy. Having to talk with many individuals for a news story, he spends a lot of time interacting with people through phone calls or through interviews.

“I can’t think of any other job where I get to interact with so many people,” said Mr. Carpenter.

Aside from writing stories and gathering information, Mr. Carpenter also works as a videographer for KTUU. As he travels, he also takes videos and pictures, making stories out of visual image rather than just words on paper.

Mr. Carpenter and fellow KTUU videographer Aaron Weaver were in Galena putting together a documentary about the Iron Dog for NBC. The same day they were in the journalism class, they also interviewed math and physical education teacher Keilah Redman about having her wedding plans disrupted by the changes in the Iditarod race route.

Mr. Carpenter was born and raised in Bethel, Alaska. He graduated from UAA with a journalism degree in 2005.

His career started as an intern for Anchorage television station KTVA when he was 17 years old. Starting out as an intern, he made copies and scripts. He moved up quickly through the ranks within the journalism career field and acquired many new skills. He said he has had almost every job within the news.

“It was about learning as much as I could,” said Mr. Carpenter.

Mr. Carpenter faces challenges everyday as reporter, one of those being looking good on camera. Wearing make-up is actually an important part of news, he said. “Everyone wears make-up,” he said, since TV journalism is such a visual experience.

Apart from wearing make-up, the tone used within TV journalism is different than that in print journalism. Television reporters use a conversational tone, as if you are talking directly to someone, said Mr. Carpenter.

Before leaving the classroom, Mr. Carpenter gave the students some words of advice regarding journalism saying, “If you are looking for an exciting career, journalism is a pretty cool job.”