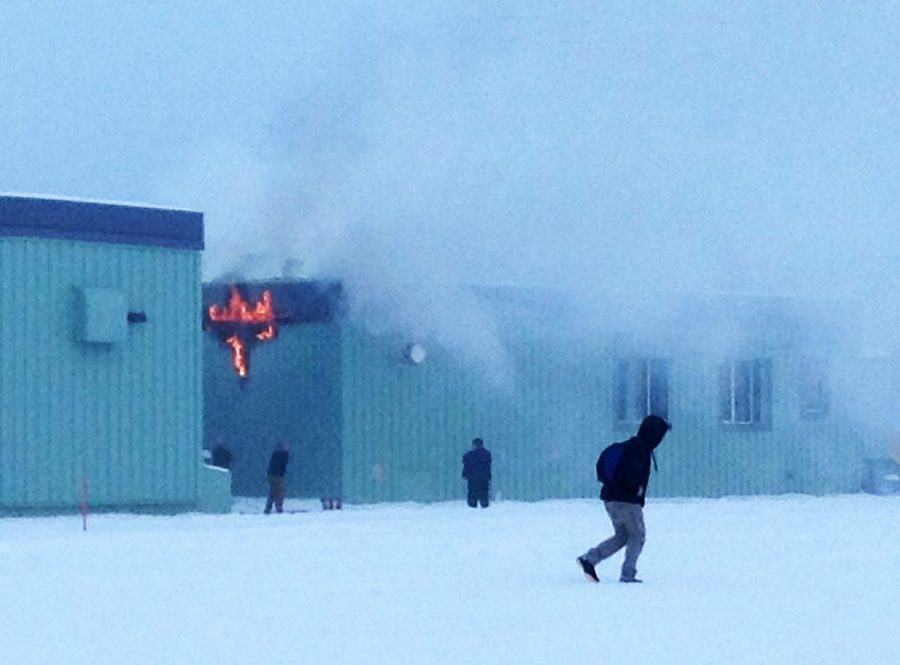 The dining hall fire on Jan. 12 pictured moments after the students were evacuated. Thanks to Rudi Joseph for this photo.

Even though the school lost much of its food from the fire last week at the Two Seasons Dining Hall, practically all of the contents of the freezers have been saved.

Culinary arts teacher Rand Rosecrans said during the building evacuation that he closed all the doors where food was stored after he made sure no one was in there. He said that he made sure all the food storage was closed and the canned goods area was closed.

Over 99% of the food was saved back in the freezers, he said, which were shut during the fire. The freezers are in an entirely another building. The ventilation is separate, so no smoke or contaminates got into the food storages.

“I’m real thankful to all the people that came in and helped us,” said Chef Rand. “We had a lot of good community support.”

Despite the fast action by Chef Rand, the school still lost a fair amount of food. He wasn’t able to give a cost estimate for how much was lost.

Before the building got really smoky, Chef Rand went and closed all the doors after he made sure no one was in there. He made sure all the food storage was closed, the canned goods area was closed.

Chef Rand said that the school doesn’t need any donations. He said that it will take a few more days to return to the normal school menu. That food has been reordered.