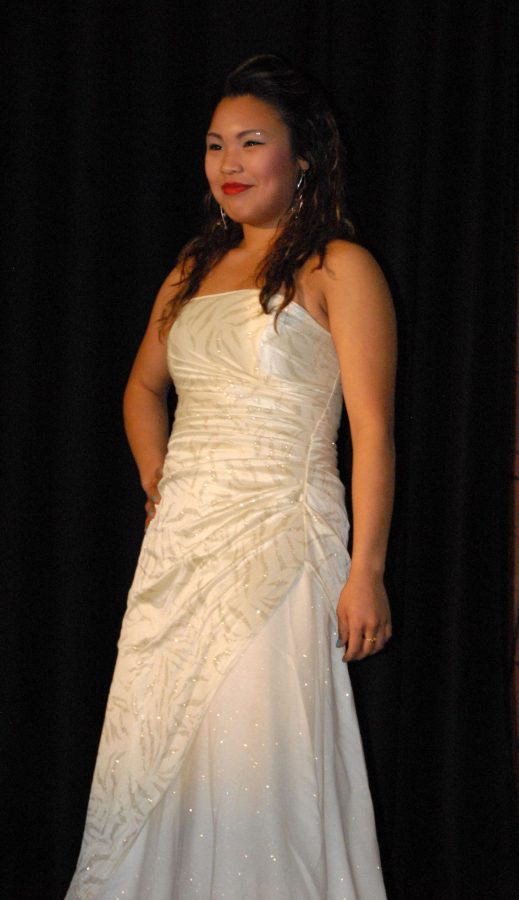 GILA sophomore Danyal Harvey models a prom dress during the Fifth Annual Boutique and Fashion Show during the March 15 show.

The community of Galena had a fantastic time watching a night of theater on Saturday, March 15 in the GILA auditorium featuring a play by the SHS elementary students, a fashion show by Galena Young Life, a show from Matt McCann’s improvisation group, and videos produced by Galena high school students for the annual Northern Echoes Film Festival.

The performances completed a week of theater work done in the classrooms around the school by the Drama Ladies, a group of four visiting theater teachers from the University of Texas. The festival films had the help of Erick Robertson, a visiting filmmaker who has come to GILA on several other occasions.

Students in Galena worked very hard for one week preparing for this year’s performances.

The elementary students put on a hilarious play, directed by Gwenyth Reitz and Spring Snyder, two of the visiting drama teachers. The play as a parody of the children’s book The Stinky Cheese Man, with stories given an Alaskan theme written by the students.

Ms. Reitz said that she loved how the kids she worked with were able to find themselves, and how they worked together quickly.

“We have the best jobs,” Ms. Snyder said. Both Ms. Snyder and Ms. Reitz were impressed by the student’s performance and originality.

Everyone enjoyed watching the children on stage.

“The play displayed an engaging sense of originality,” said Ross Tulloch, high school science teacher, whose daughter performed in the production. The play was very funny and was very well put together.

The Young Life Fifth Annual Boutique and Fashion Show was another event that the community got to enjoy.

High school girls from Galena Interior Learning Academy and Sidney Huntington School were all smiles as they walked across the stage in beautiful dresses and gowns in front of their friends and teachers.

The evening ended with a showing of student-created movies for the Northern Echoes Film Festival.

The movies were a huge hit amongst students.

The first film made this year was I Thought, a romantic comedy starring Blaine Romo, Amanda Kopp, Ariana Swan, and Joe Apfelbeck. Visiting filmmaker Mr. Robertson said he loved I Thought because of the production quality.

Behind the Bully was written by Kala Hendrickson. Her movie was a documentary about bullying in high school. It gave an important message to students about bullying and what a bully is.

Shandeigh Roller wrote the screenplay for Gingsi. The horror movie stared myself as the Gingsi and Shandeigh as the heroine. Other actors in Gingsi were Chris Krueger, Teddie Ann Tom, Clayton Ticknor, and Derrick Black.

IDA, which stands for “inappropriate display of affection,” was a favorite among students. Mary Coolidge wrote and starred in this film along with Chris Semaken and Jayden Duny.

The audience also viewed videos made by students in previous years as well.