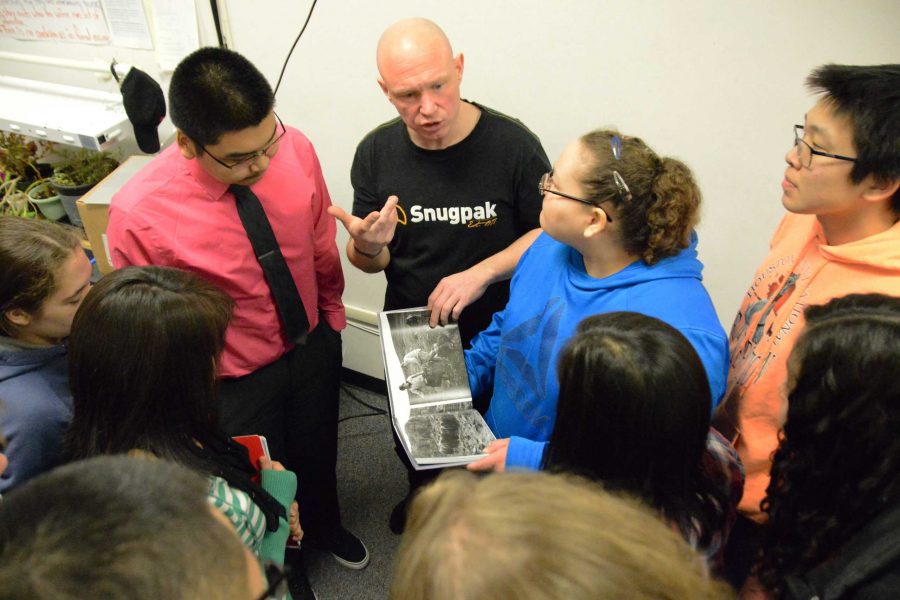 Photojournalist Ed Gold shows his book about Wales, Alaska, with the students in the journalism class.

Ed Gold is a British free-lance photojournalist who has returned to Galena to write an article about a family that lives 40 miles outside of Ruby.

Mr. Gold came to talk with our journalism class on Feb. 22 about his career and why he traveled to Alaska again. He last visited Galena in 2015 to interview Sidney Huntington but missed the opportunity due to Mr. Huntington’s passing.

Mr. Gold said he is fascinated about Alaska and that is why he came back to Alaska.

He said his fascination with Alaska began with his time in Wales in Britain, where he lived.

Mr. Gold said he drove his “motor-trike” from New York to California, and searched up “the furthest westernmost place in the United States” and what came up was Wales, Alaska.

Mr. Gold said he traveled with his motor-trike all the way to Anchorage, called a Ravn manager where the highway to Wales was, but the manager just laughed and told him the only to Wales was by a plane. He then had stayed in Wales for a couple months and took pictures of the fascinating native culture of Wales. He made a book of the pictures he taken in Wales and is on sale on Barnes & Noble.