Losing your marbles, on purpose 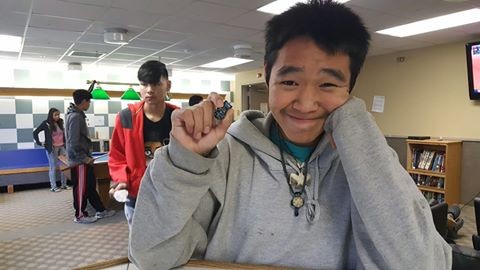 Junior Ronnie Coolidge with one of the 11 marbles he has found hidden on the GILA campus. Photo courtesy of the GILA marble hiding and finding Facebook page.

Resident advisor Chuck Peterson hides homemade marbles on the GILA campus made from borosilicate glass and asks students to find them.

“We kind of have a few students that are really good at finding them. We encourage other students to help find the marbles,” said Mr. Peterson.

He has hidden them on top of things at dugouts at the baseball fields, where they were found pretty quickly. Fellow marble hider and resident advisor Craig Hibl has hidden them at the dance, which seem to be a pretty big hit. The marbles were mainly hidden under benches and other furniture.

The students enjoy the program, and there’s a Facebook page devoted to the activity at GILA marble hiding and finding.

GILA junior Ronnie Coolidge is one of the students who is best at finding those marbles around campus. Why does he like to look for marbles?

“So I can have something to remind me of this place when I leave,” Ronnie said.

The total amount of marbles he found dating back to his freshman year was 11 marbles. Ronnie’s planning on graduating here at GILA.

Mr. Peterson likes to make his own marbles, but does not have the necessary equipment to make marbles here at GILA. Borosilicate glass is melted by a propane oxygen torch, and gravity and inertia is used to make them round, as well as graphite tools.

“It is really difficult to make, but rewarding,” he said, adding that each marble can take hours to make. Glass blowing has been around for rat least 2,000 years, he said.