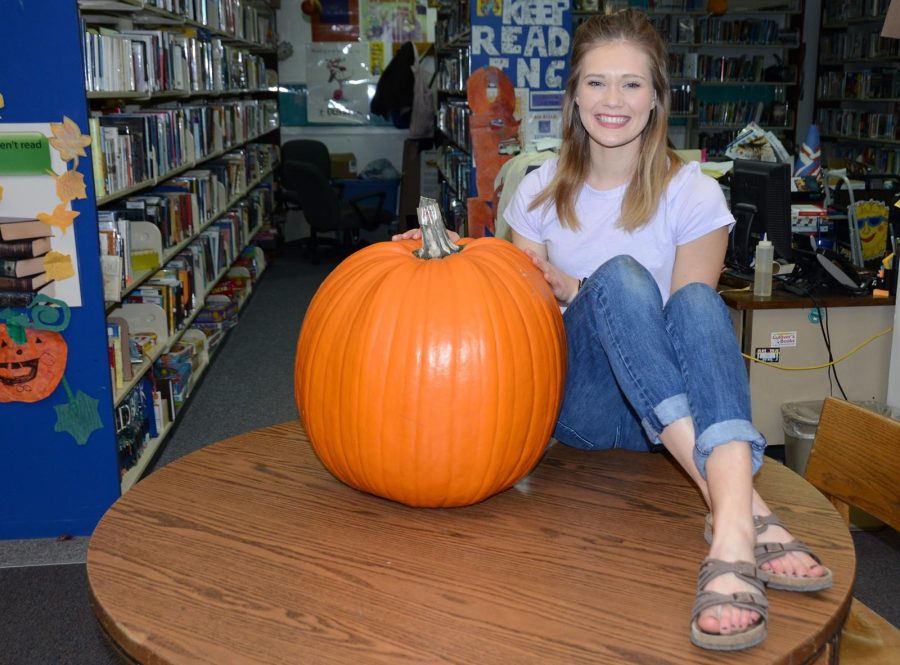 Sarah Brown gets the prize with her 60-pound pumpkin for the cross-country fundraiser, and the community will be served with lots of pies and other goodies as she shares her good fortune.

Not many can brag about owning a 60-pound pumpkin, but Sarah Brown can after winning the Galena cross-country running team’s Giant Pumpkin Raffle on Oct. 28.

“I freaked out and threw my hands up in the air and did a bunch of awkward movements with my hands and legs,” Sarah said. “I was really, really excited.”

Sarah plans to bake with the pumpkin for the Coffee Shop, the Galena Bible Church, and the Senior Café. Sarah said that although she felt that she put a good amount of money towards the raffle, she did not expect to win.

When she was carving the pumpkin this weekend, she said that the rind was so thick that she needed power tools to cut it up.

The raffle raised a “whopping” $910 for the Galena cross-country team, said Molissa Wightman, cross country coach. The proceeds will go towards buying new jerseys for the team. The five ticket sellers were Carlee Merriner, Celest Kriska, Elizabeth Green, Pearle Green, and Sarah Brown. The raffle was advertised through posters created by Mr. Apfelbeck’s business applications class, which the team posted throughout Galena to advertise, along with an announcement on KIYU that was posted by Mr. Apfelbeck.

“The cross country team is extremely grateful to Paul and Isa Apfelbeck for donating such a beautiful pumpkin. This raffle was a success because the community was so excited about winning a homegrown pumpkin. I’d also like to thank everyone that took a chance on the raffle. We will be able to order new uniforms and team jackets with the money raised,” said Mrs. Wightman. She also said that the team had plenty of fun with the raffle.

Mr. Apfelbeck donated and grew the pumpkin that the team used for the raffle. He grew the pumpkin in his greenhouse, fertilizing the massive plant by hand, and using seeds that he bought from Johnny’s Seeds in Maine.

The seeds are called Champion pumpkin seeds, which are related to the Atlantic Giants. Atlantic Giants pumpkins are known to grow to up to 2,000 pounds and can be classified as a part of the squash species Cucurbita maxima. More information about pumpkin varieties and the science behind growing giant pumpkins can be found at http://extension.illinois.edu/pumpkins/varieties.cfm and http://www.smithsonianmag.com/science-nature/surprising-science-giant-pumpkins-180957099/?no-istd

After growing the pumpkin, Mr. Apfelbeck said, “It would be really cool to give to Molissa and the kids on the team” to help out with funds. Mr. Apfelbeck chose the running team specifically because it was the only sport that he was good at in high school.

The raffle required that the winner would give back the seeds to Mr. Apfelbeck after they carve the pumpkin. He plans to dry the seeds and give them away to gardeners in Galena and up and down the river so that Alaska can begin to “cultivate giant pumpkins up and down the Yukon River.”