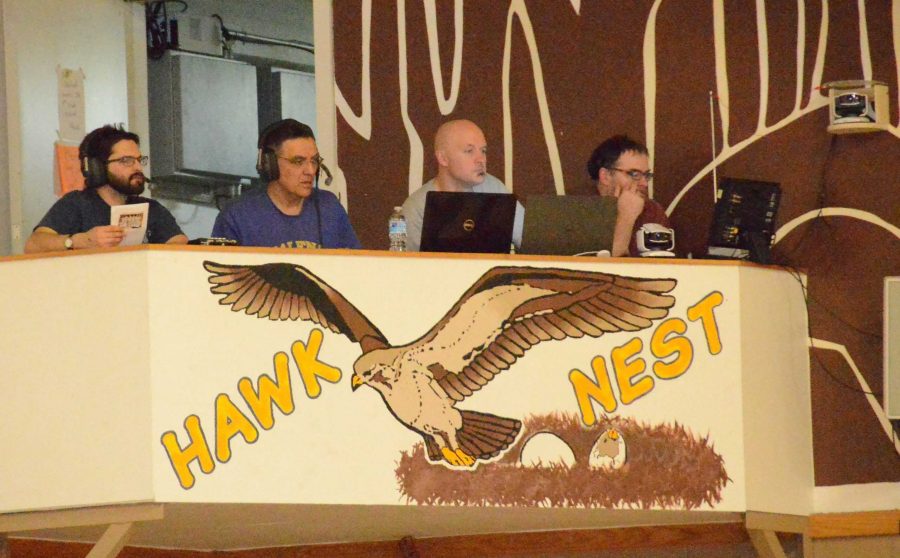 KIYU general manager Brian Landrum (right) monitors the streaming video alongside athletic director Jon Buchanan in the Hawk's Nest during a recent basketball game. The new streaming camera can be seen mounted on the wall next to Mr. Landrum.

The people watching the videos of the first streamed basketball games in the SHS gym had a lot of positive feedback, said athletic director Jon Buchanan. There was very little negative feedback regarding the cameras.

The streaming video was first used during the games against Eielson High School’s boys and girls teams on Feb. 19 and 20.

“On Friday [Feb. 19], it was like juggling chainsaws,” he said. “On Saturday, it was like relaxing in a mud bath.”

The Hawks faced and crushed both Eielson boys and girls. The boys beat Eielson 58-46 on Saturday; the Lady Hawks beat the Lady Ravens 68-54. On Friday, the boys beat the visitors 59-37, and the girls won 74-42.

There was also live streaming in the SHS gym on Feb. 26-27 during the games against Hutchison High School and on March 4-5 when the Lady Hawks played Kotzebue.