Senior Skip Day was a fun event for everyone 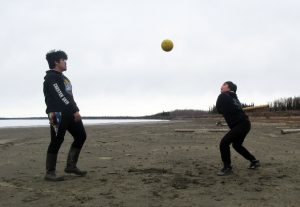 Senior Skip Day at the dunes was Friday, May 4.

The school wanted to bring Galena Interior Learning Academy (GILA) seniors and Sidney C. Huntington (SHS) seniors together and have this event to have fun in a safe, good, clean way.

There were thirty-five seniors and three chaperones who attended. The chaperones were senior advisor and math teacher Molissa Wightman, librarian Genny Brown, and cross-country coach and Galena mayor Jon Korta. Students started going to the dunes at 9:20 a.m. and returned at 2:30 pm.

“There are so many people to thank,” said Ms. Wightman. “Carrie Given helped by bringing out the pallets yesterday, Kim Wolf made cookies and brought fire wood, the Kortas brought out juice, a grill, and tents. Sandy Scotton donated cake, Mrs. Betterton made scones and baked goods, Genny Brown brought out Jiffy Pop and kabobs. And the meat was donated by the Kortas, Apfelbecks, Moos’s, and Genny. Trisha donated popcorn, Liz Schababerle donated Russian tea and baked goods. Vera donated chips, Tammy contributed brats, buns, chips, condiments, and paper products.”

Senior Skip Day back in the day was called Senior Sneak for SHS seniors.

After a while Mariah Wigley and Elena “E” Jacobs started putting up their hammocks. E had a light blue one set up sort of back in the trees, and Mariah had a dark green one set up in the front. The nice thing was they let others use it.

After a while seniors had an unexpected visitor, his name is Tim Lorenzini. He was a former social studies teacher at Galena Interior Learning Academy. He stayed and talked with a few people for a little while, then he left.

When seniors got more awake, eleven students started to play Lap Game, or what I call Bat Ball. Bat Ball is sort of like baseball, but there’s only two sides, not four bases. The pitcher is close to hitter and throws the ball up and try players hit it with a bat. The first batter only gets one chance to hit the ball. The pitcher and the person who catches the ball get two tries to hit the ball, and the last person at bat has three chances to hit the ball. After seniors hit the ball, they got the choice to run or wait for a better hit. Everyone got to go all the way to the other end. If the other team catches the ball or touches the other team with the ball, they are now the in team.

“Playing lap was my favorite part because I got to run and it brought back a lot of flashbacks from childhood,” said Cassandra David, a senior from Nunapitchuk.

For the third game, six seniors played was Red Rover, Red Rover. Christopher Adams got clotheslined by one of the groups. He was okay, thank goodness. That other team and Chris couldn’t quit laughing.

After the games, seniors went to go have lunch. After lunch, Cassandra and I were laying in one of the hammock relaxing. We saw Cora jumping up with fear because there was a spider on her.

While some students were relaxing and sitting around the fire, others were walking along the beach. While two students were playing volleyball, until the volleyball fell into a puddle and got wet.

We were sitting around the fire having s’mores and hot dogs waiting to go back to the dorms, and the Senior Skip Day was over.