Pentathlon team ready to overwhelm teacher with what they’ve learned 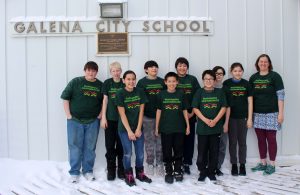 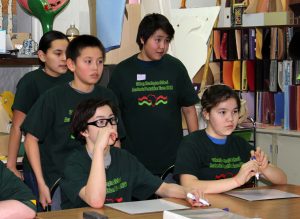 The team during a recent training session. Photo by Hailey Ambrose.

Students on the Academic Pentathlon team will be holding the event Are You Smarter than a Middle Schooler at 4 p.m. Sunday, March 4 at the Larson Charlie Community Hall following the end of the Galena Spring Carnival. The event is free.

The students will be working as a team to try and beat Mr. Apfelbeck in the same subjects they were studying for the pentathlon.

This year’s pentathlon team will be the first one in about ten years for the Sidney C. Huntington School, said team advisor Dr. Tamera Huntingtin.

The main subject of study for this year is Africa. The students studied multiple subjects based on Africa. For science they studied genetic diseases (more specifically, Ebola and malaria); for language arts they studied a book called The Long Walk to Water; for math they studied general math up to algebra; and for social studies they studied the history of West Africa. They also had to study fine arts for Africa, and based on a song they are to recognize the instruments, song name, and composer.

The formal Academic Pentathlon event will be held later on this year. Since it is a closed doors event to prevent cheating there is no real way to watch it, the team wanted a way to show off to the community, and the Spring Carnival provided them the ability to show off how hard they have been working, said Dr. Huntington.

Are You Smarter Than a Middle Schooler will be showing off what students have learned, and what better way than a contest based on a famous show, said Dr. Huntington.

This will be the final event at the spring carnival, with the pentathlon kids competing against a teacher voted on by the community. That lucky person is Paul Apfelbeck, the media and information technology teacher.

He will be competing against the students in subjects that they have been studying for months. If he wins he will be rewarded with 100 Raven Points; however, if the students win, they will be eating at a restaurant in Seattle’s Space Needle.

These students have been working hard fundraising and studying for this event and their trip to Seattle. In the practice test, the team scored 18th in the nation, said Dr. Huntington.