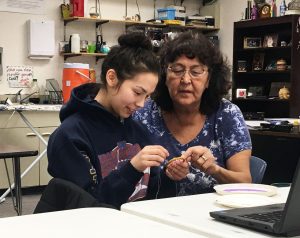 Freda Beasley working with a student in the cultural arts class. Photo by Lydia Chunak

After 25 years of teaching in Galena, Holy Cross, Fairbanks and Anvik, cultural arts teacher Freda Beasley will be retiring.

When Mrs. Beasley was asked the best thing a student had ever told her, she said, “I inspired her to go to college to become an elementary teacher because I was her role model.”

Mrs. Beasley was born in Holikachuk, a village on the Innoko River. When she was five years old, her family moved to Anvik. Her parents are Edward and Lina Demoski. She has nine siblings, and she is the fifth oldest.

Mrs. Beasley attended college at the University of Alaska Fairbanks, but, she dropped out after two years. She then enrolled to X-CED, and got her bachelor of arts degree.

Ms. Beasley then got her certificate for elementary education and a masters of education in Educational Leadership, and this allows her to be a principal.
One thing that Mrs. Beasley really enjoyed was being a principal in her hometown of Anvik. She was a principal there for two years, and then moved to Galena after having met Howard Beasley. They were married in Galena in 2000.

Before becoming a teacher at GCSD, Mrs. Beasley worked for the Education Department at UAF and was an adjunct professor for two years. Her main duty was teaching several education courses for UAF and also teacher mentoring for student teachers in Interior Alaska.