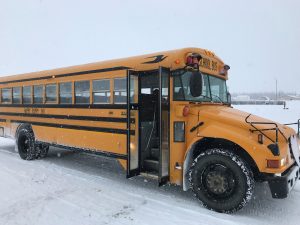 Kim Wolf’s school bus will be retiring at the end of the year, along with Kim herself. Photo by Alex Evans.

The Galena City School District is getting a new school bus.

The bus is a brand new 2019 Bluebird model with 44 passenger seats purchased by the Galena City School District for $100,873, according to school district documents.

The new bus will be replacing the bus Kim Wolf is currently driving once she leaves the community at the end of the school year. She’s taking the bus she owns with her.

The new bus with be shipped to Nenana and then will be put on a barge leaving for Galena and is expected to arrive next school year.