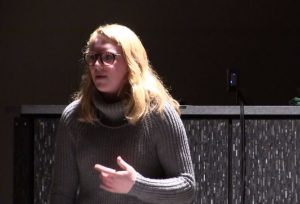 Roxi Mountcastle at the October Open Mic in the GILA sub.

A single poem, held under scrutiny beside almost a dozen musical pieces almost begs to be marked off as dull, yet during Octobers open mic night, one performer demanded the audience’s attention when they took the stage with a nearly five-minute-long original poem titled, “An Alternate State of Mind.”

The poem is reprinted in its entirety at the end of this article. Roxi’s performance starts at 15:09 in the video recording.

Atlanta Roxanne Mountcastle (Roxi), a junior at GILA, performed an original, heart-touching spoken word poem in between a multitude of singing acts performed by her fellow students, about half of which were accompanied by Ptarmigan Hall music and art director Jared Redford

“I was worried I would mess up,” said Roxi after Open Mic had finished, “[but] it was something I had to get off my chest.”

Once Roxi had decided that she wanted to perform a deep and personal original poem at Open Mic, she spent nearly a month practicing in her dorm room. “I really wanted to perform it at open mic and the more I wrote the more it just came out of me.”

To make sure that the first personal poem that she shared with her peers sounded exactly how she wanted it too, she sought out feedback from her peers and teachers. She would recite it three to four times some days, developing a cadence and devoting the words to memory. “I wanted to be able to speak to the audience without depending on the pages,” said Roxi, “I had about four pages memorized, sometimes I’d read my poem in my head just to practice it.”
Roxi’s interest in poetry started in early February. She was inspired by the genre “slam” or “button” poetry. Her favorite button poem is “Explaining My Depression to My Mother.”

“I just love the way poetry can be expressed, it doesn’t stop being poetry because it doesn’t follow a certain structure, it’s more like to each their own,” she said.

An Alternate State of Mind
by Atlanta “Roxi” Mountcastle

I’m happy here I swear!
For I know I must be here.
As long as I put up strong walls…
I shouldn’t break down?
But cracks can form and things crumble all around.

I’m fine!
No, really I’m alright!
Cries on the inside,
can’t you see I’m just numb?
No longer truly alive.

Exhales, inhales, they say it helps.
I must be fine?
I tell myself I am,
and why would I lie,
unless my life is a lie,

Looks left, looks right,
but it’s not all right!
I say it is,
and it only is till it goes left!
Till the walls I put up fold

and they fold hard and fast,
crumbling slow, Holding them up made me oh so old!
I’m deranged not strange,
possibly critically insane,
becoming mad in the brain!

But hey! It’s okay!
If I say I’m fine,
I must be fine,
it’s my alternate state of mind!
Eventually my lies will become my reality right?

Hidden in a shell that sits in plain sight,
being chucked back into the big ocean,
lifeless as it drowned in the depths of the sea!
The pressure concaving it, shattering it into oblivion!
The shell cracked, my shell cracked.

Exposed!
No longer to hide inner emotions,
broken, all alone and no walls!
All that lies are shattered pieces,
pieces even too small to pick back up again!

Laughter is my best glue!
It is my best bet on good medication!
I can joke and laugh,
and it seems alright,
when it’s really not all right!

(Sighs) And if I tell myself I’m fine,
I’m sure I myself will make it alright!
I will make fine be set in my mind!
I will make my down my up,
so when I feel so very low I will really be high with the birds in the sky!

My illusions will make my world better!
The veil that rest in my eyes turns the grey into vibrant bold
rainbows,
and frowns into smiles
and tears into giggles

No one else’s mind set can alter my state of mind!

Does shattered really mean broken,
or is it looking at pieces put together differently?
Is dropped really falling,
or is it a different form of landing?
Who has determined the meaning of all these things

and why do they mean what they really mean?
What gave them the right to define anything?
And what gives you the right to judge any part of me,
to look down upon me,
to try and paint my walls with hate and shame that you’ve thrown all over me?

Only I can make my alternant state of mind
my reality.
And my reality needs to be real to me,
not just through the looking glass,
but to the eye that reads!

Because I can hold a smile with broken teeth
and peal an orange with no finger nails!
My strength not only sits in my spine,
but lies in my core!
And it’s only a matter of time before that pencil I fiddle in class snaps with the piece that lies within me!

I swear I’m too real for this reality!
I see thing through a different glass,
time or space!
I don’t see the same me as you do
when I look in the mirror!

I try and smile at that reflection
and all I see is shattered pieces behind a pearl smile.
Green eyes that shine to you
look dull to me!
My soul screams and aches for the freedom it has earned!

I look in the Mirror,
but that is not the me I see!
I see something else hidden the dark with the dirt in my pores,
I see a frown with a smile that glows,
something is hidden in me but it does not represent the real me!

It shows cold like a frozen over ice-age,
trapping souls for millions of unrecorded years!
It laughs at the pain it brings to me,
yet I still try and bring joy to others,
and make the pain go unseen!

Unrecognizable!
Undefinable!
You’d never notice a difference unless you saw the pure soul that was once me!
Not the demon that hides in the shadows of my blinked eyes!
For he lurks deep and dark waiting on a moment to light that spark!

He crawls waiting for the moment to make me bark!
As he ignites the flame that’ll make me snap!
No longer hiding behind the weak walls of my low high.
What was once keeping me sane,
is now lost in the scrambles of my insanity.