Galena teams face off against each other for tourney championship 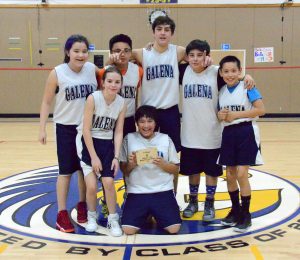 The Galena Junior High Hawks ended the season on a high note when both team one and two came in first and second place at the Junior High Tournament on Nov. 2 and 3 in the SHS gym.

Galena team two came in first place, beating their fellow players on Galena team one in the championship game.

“When the Hawks are playing as a team together, good things happen,” said coach David Wightman.

Coach Wightman said the players have been a team for three years and have been practicing at the gym very often, so their skills have improved during the past three seasons. The players have also been attending basketball camps and playing at open gym.

Playing as a team is the biggest part for the Junior High Hawks in getting their wins each game, he said, adding that their first loss of the season was against Lumen due to poor offense. When running the plays, hustle, and play good defense, they can be a tough team to beat. “We made adjustments for the final games and held them to 20 points the entire game,” said coach Wightman.

Coach Wightman said eighth-grader Joe Riddle has developed a lot as a player over the past few years, adding that Joe “is a tough post player with the best footwork we will see at the eighth grade level and is equivalent to any other post player in high school.”

Cashious Bergman has been working on his outside shot, and he has good range as a shooter from the three-point line, said coach Wightman. He continues to work on his drives to the basket, and to create off the dribble becomes important.

Joe Riddle made the all-tourney team at the tournaments in Tri-Valley and Tok, Cash was chosen for all tourney in Tok.

“You don’t see many athletes working on post moves and footwork, everyone wants to just shoot three’s these day(s),” said coach Wightman.