First open mic is a success 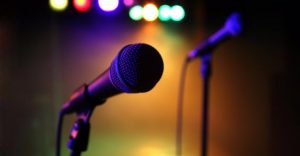 The first open mic night of the year, held on September 21 in the Student Union Building on the GILA campus, was a success.

Open mic is a musical performance held once a month where students and staff members can come together and perform for the community. After only a couple of rehearsals, the performers were ready to bring it to the stage.

“People loved the entertainment” and that there was big student attendance, with around seventy students attending, said Ptarmigan Hall music and arts director Jared Redford, who coordinated the event.

“[All students are] more than welcome to be in the open mic,” said Mr. Redford. “All community members can attend.”

Mr. Redford said the most surprising performances were from junior Angelica Firmin, who sang Hallelujah, and resident advisor Michaela Matherne, who sung a Christina Perri song accompanied by Uli Redford on piano.

Katrina Kanrilak, a junior from Tununak, had a lot of fun being a participant and said, “I look forward to doing it next month.”

The next open mic is expected to be on the Oct. 26, but the dates might change. Mr. Redford is hoping to have nine to twelve performers in October’s open mic.

The songs performed were:
• Play That Song, by Train.
• Hallelujah, by Jeff Buckley.
• Riptide, by Vance Joy.
• Say You Won’t Let Go, by Ed Sheeran.
• Heart Like Yours, by Willamette Stone.
• Sweater Weather, by The Neighborhood.
• Simple Man, by Shinedown.
• Keys, by Daniel Redford.
• In Pieces, by Sum 41.