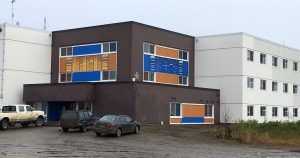 The new windows at the entrance to Ptarmigan Hall, which portrays the DNA of a ptarmigan.

Look at Ptarmigan Hall. Each of the new windows installed this summer has either an orange tint or a blue tint to them. And on the front side of the dorms, there is the design of a DNA pattern found in an actual ptarmigan in blues and oranges.

Ptarmigan Hall has new windows, a remodeled heating system for the whole building, and new carpets for the hallways.

“The reasons we needed the new windows is because the old windows were not heating efficient and lived passed their life time,” said Supt. Chris Reitan. “Last year we changed the heating system from steam to hot water and this year we made the system more heat efficient… The old steam system needed to be replaced because it was inefficiently heating the building.”

The school payed $2,016,136.00 for the entire remodeling. The first floor, the boy’s floor, and the girl’s floor have new windows. The room walls with the windows are either painted blue or orange. The hallways are all newly carpeted.

“The new carpeting was just a minor change but was well needed,” said Mr. Reitan. “The new improvements have made the dorms friendlier and adds more color to the place.”
Last winter, there were problems keeping the dorms warm. The new upgrade of the heating system should fix that problem, according to administration.

“TC construction has done an outstanding job in remodeling the dorms… Architects Alaska have designed the project and also managed the project amazingly,” said Mr. Reitan.

This project cost was estimated to be $4.7 million, but the school board had a bid from TC Construction offered a bid of $1.8 million, saving the school a total of $2.9 million. However, due to some unforeseen issues, there were some additional costs, so the whole project cost a total of $2 million, according to school district documents.