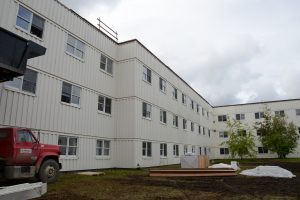 When a construction worker fell off the Ptarmigan Hall roof on Wednesday evening, the first medical responder on the scene was GILA senior Emmie Ellis.

Emmie became a state certified emergency trauma technician in 2013 following her training in GILA’s health sciences program. When the construction worker tumbled 35 feet to the ground after slipping on a rain-slick rooftop, Emmie was meeting with residence hall dean of students Ben Blasco.

“We saw him fall,” she said. After calling 911, she and Mr. Blasco ran outside. “He looked like he had partially fallen onto the concrete.”

Emmie’s emergency medical training kicked in. “He was obviously distraught,” Emmie said. The 17-year-old from Delta Junction told the construction worker she was an emergency medical technician, and she asked several questions to check his coherence.

Mr. Blasco went to get the ambulance. “I stayed with the patient,” she said. “I made sure he didn’t move. He might have had cervical spine injuries.”
Without a first aid kit, Emmie said her primary obligation was to stay and comfort the fallen man and wait for assistance.

“That was one of the first real critical situations I had been in,” she said. “I kept my skills with me and responded how I was trained to.”

After graduation, Emmie plans to get her degree in biology from Idaho State University, followed by advanced degrees at Washington Medical School in Seattle, where she wants to be either an emergency room doctor or an oncologist.

Tim Fritzler, the worksite superintendent for Wolverine Supply of Wasilla, was on the roof 25 feet away from his coworker when the accident occurred. He said the worker was tearing off the old roofing as it was raining about 6:15 p.m.

“Since it was wet and slick, [the roofing material] slipped out of his hands and he fell backwards,” he said.
Mr. Fritzler said the construction worker was 22 years old from Anchorage.

The worker had six broken ribs, one of which punctured his left lung, although about 85 percent of the lung capacity could still be used. “He has about a 1-inch laceration to the head,” he said. “He will have to have surgery for a broken jaw.”

The worker was lucky to have fallen in mud, he said. “He left a 4-inch impression in the ground.”

Galena Chief of Police Aaron Parker said he received many calls from concerned people after the worker fell from the roof. The clinic ambulance arrived shortly after receiving the calls, and Lifeflight air transport carried the man to Providence Hospital in Anchorage around 8:30 p.m.

Even though the accident had the potential to be life-threatening, “he is expected to survive and recover fully,” Chief Parker said. “It was quite a relief this morning to find out he’s going to be fine.”