New science and math teacher has her eyes on the sky 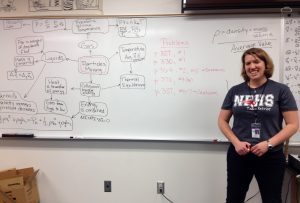 Corrie Lambrecht comes to Galena via the heavens.

Ten years ago, the new science and math teacher was peering into the night sky at the Los Alamos National Laboratory’s observatory, working on projects during the summer to go along with her undergraduate work in astrophysics. “I fell in love with astronomy when I was in high school,” she said.

Even in the retelling about her experiences at Los Alamos, she is upbeat and excited describing the first time she saw Saturn though the telescope, the thrill of seeing the four largest Jovian moons, or the joy of seeing distant globular clusters and galaxies while setting up the specialized cameras needed for astronomy.

Like all workplaces, though, there’s a downside. “I loved astronomy, but I get bored working by myself,” she said. “I like science, but I like people, too.”

Ms. Lambrecht will teach physical science, geology, and algebra 1 in the upcoming school year. Her classroom is at the SHS campus.

Ms. Lambrecht was born in Evansville, Ind., the daughter of the Rev. Buzz and Diane Lambrecht. Her father was a pastor for the United Methodist Church. Most of her childhood was spent in western Kansas. “The town I’m probably the fondest of is Protection,” she said.

Most of the towns she grew up in had several hundred residents – the smallest about 200, the rest around 500-600, so Galena’s population isn’t a surprise. She graduated valedictorian in a class of 43 from Wabaunsee High School in Alma, Kan. “It was the biggest school I went to,” she said.

After spending several years at the New Mexico Institute of Mining and Technology’s astrophysics program, she moved to Albuquerque, deciding to earn her bachelor of arts degree in cultural anthropology, with a minor in religious studies, from the University of New Mexico.

While living in Albuquerque, she volunteered with Catholic Charities to work with refugees, most notably from civil wars in central Africa, the genocide in Rwanda, and resettlement of Tibetans in New Mexico.

During this time, she started tutoring children from local families, with a focus on science and math.

After earning her bachelor’s degree, she moved to Alaska, where she earned her master’s degree in secondary education from the University of Alaska Fairbanks. This is her first teaching assignment. “I’m really excited to live by the banks of the Yukon River,” she said.

Ms. Lambrecht arrives in Galena with her companion Nick Hruby, whose sister Melinda is a 2008 alumnus of GILA. He is originally from Tok.

Mr. Hruby most recently worked as a mechanical engineer in aerospace design for Reitech Global, but quit his position to join Ms. Lambrecht in Galena. He’s interested in sustainable energy and has already reached out to those involved with the boarding school’s biomass energy project.